The EVL project is now Xenomai 4. The EVL core was originally a fork of the Xenomai 3 Cobalt core, which went through a significant overhaul to make it SMP-scalable, easier to grasp and maintain too. However, both still share the same principles when it comes to the dual kernel technique. As a result, Dovetail provides the pipeline interface to the Xenomai 3.2 release, which is based on the earlier Cobalt core. In the same move, EVL becomes the Xenomai 4 project. 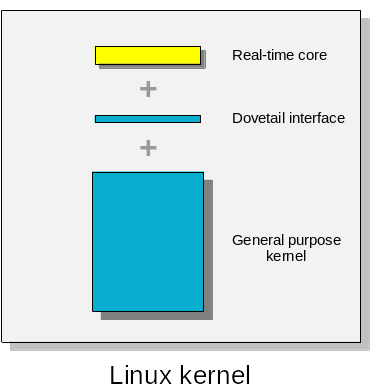 A dual kernel architecture. Like its predecessors in the Xenomai core series, Xenomai 4 with the EVL core brings real-time capabilities to Linux by embedding a companion core into the kernel, which specifically deals with tasks requiring ultra low and bounded response time to events. For this reason, this approach is known as a dual kernel architecture, delivering stringent real-time guarantees to some tasks alongside rich operating system services to others. In this model, the general purpose kernel and the real-time core operate almost asynchronously, both serving their own set of tasks, always giving the latter precedence over the former.

In order to achieve this, the Xenomai 4 project works on three components:

Originally, the Dovetail code base forked off of the I-pipe interface back in 2015, mainly to address fundamental maintenance issues with respect to tracking the most recent kernel releases. In parallel, a simplified variant of the Cobalt core once known as ‘Steely’ was implemented in order to experiment freely with Dovetail as the latter significantly departed from the I-pipe interface. At some point, Steely evolved into an even simpler, basic and more scalable real-time core which now serves as the reference implementation for Dovetail, known as the EVL core which is at the heart of the Xenomai 4 effort today.

When is a dual kernel architecture a good fit?

A dual kernel system should keep the functional overlap between the general purpose kernel and the companion core minimal, only to hand over the time-critical workload to a dedicated component which is simple and decoupled enough from the rest of the system for you to trust. Typical applications best-served by such infrastructure have to acquire data from external devices with only small jitter within a few tenths of microseconds (absolute worst case) once available, process such input over POSIX threads which can meet real-time requirements by running on the high-priority stage, offloading any non-(time-)critical work to common threads. Generally speaking, such approach like the EVL core implements may be a good fit for the job in the following cases:

What does a dual kernel architecture require from your application?

In order to meet the deadlines, a dual kernel architecture requires your application to exclusively use the dedicated system call interface the real-time core implements. With the EVL core, this API is libevl, or any other high-level API based on it which abides by this rule. Any regular Linux system call issued while running on the high-priority stage would automatically demote the caller to the low priority stage, dropping real-time guarantees in the process.

This rule has consequences when using C++ for instance, which requires to define the set of usable classes and runtime features which may be available to the application.

This said, your application may use any service from your favorite standard C/C++ library outside of the time-critical context.

Generally speaking, a clear separation of the real-time workload from the rest of the implementation in your application is key. Having such a split in place should be a rule of thumb regardless of the type of real-time approach including with native preemption, it is crucial with a dual kernel architecture. Besides, this calls for a clear definition of the (few) interface(s) which may exist between the real-time and general purpose tasks, which is definitely the right thing to do.

The basic execution unit the EVL core recognizes for delivering its services in user space is the thread, which commonly translates as POSIX threads in user space.

Which APIs are available for implementing applications?

A C language API also known as libevl is available for programming real-time applications which need to call the EVL core services.

An effort to enable the Rust language for the same purpose is underway. You are welcome to discuss the design and implementation of the upcoming revl interface on the RIOT channel or the mailing list.

Which API is available for implementing real-time device drivers?

The EVL core exports a kernel API for writing drivers, extending the Linux device driver interface so that applications can benefit from out-of-band services delivered from the high-priority execution stage.

The basic execution unit the EVL core recognizes for delivering its services in kernel space is the kthread, which is a common Linux kthread on EVL steroids.

What is the dual kernel code footprint?

All figures reported in the charts below below have been determined by CLOC, only retaining C and assembly source files in the comparisons.

Dovetail footprint on kernel code. The code footprint of the Dovetail interface is 7.8 Kloc added to the kernel as of v5.7-rc5. Most changes happen in the generic kernel and driver code, which amount for 73% of the total. The rest is split into ARM, arm64 and x86-specific code. An architecture-specific port represents less than 10% of the total on average. 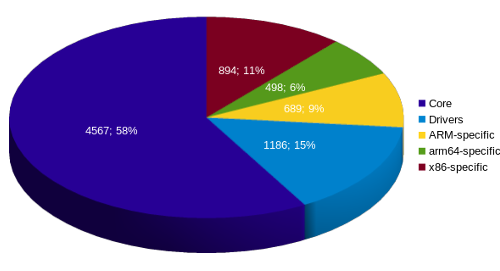 EVL core footprint on kernel code. The EVL core on top of Dovetail is 15.2 Kloc. 97% of this code is architecture-agnostic. Each architecture port amounts for 1% of the rest, which is 163 lines of code on average. This shows that Dovetail is actually responsible for the overwhelming majority of the architecture-specific support a companion core should need. 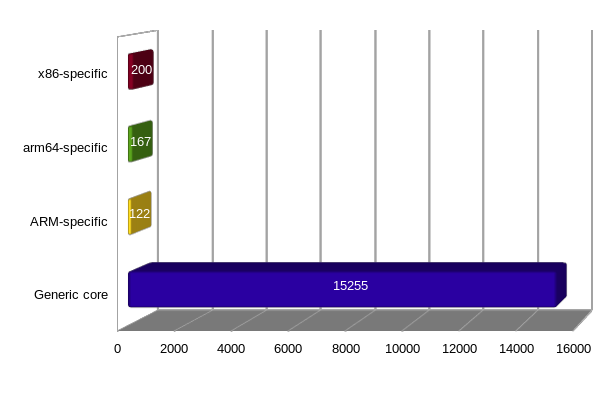 Overall dual kernel code footprint. The overall footprint of the EVL dual kernel system amounts to 26 Kloc, which includes Dovetail, the EVL core and its out-of-band capable drivers so far. This is 0.13% of the total kernel code base as of v5.7-rc5.

Comparing I-pipe and Dovetail footprints. These figures compare the latest I-pipe implementation available to date based on kernel v4.19.x with Dovetail for v5.7-rc5. Dovetail provides additional core services such as built-in out-of-band task scheduling support which, as a consequence companion cores don’t have to implement for each CPU architecture. The ARM-specific code is notably smaller for Dovetail, thanks to a better integration of the interrupt pipeline logic within the mainline kernel. 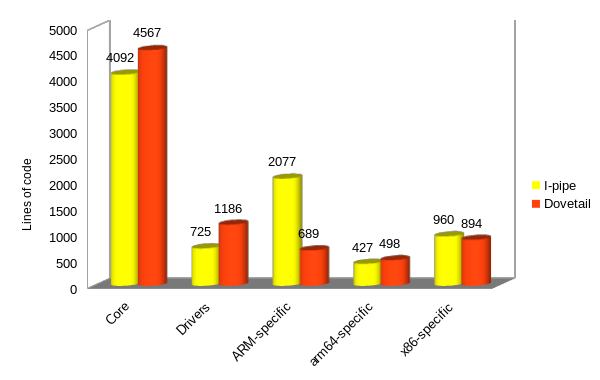 Comparing Xenomai 3 Cobalt and Xenomai 4 EVL core footprints. These figures compare Cobalt 3.1 with the EVL core for kernel v5.7-rc5. The drastic reduction of the code footprint the EVL core shows is mainly due to focusing on a simpler yet flexible feature set and reusing the common driver model. Besides, most of the architecture-specific code is handled by Dovetail, unlike Cobalt which still has to deal with the nitty-gritty details of task switching, like FPU management. 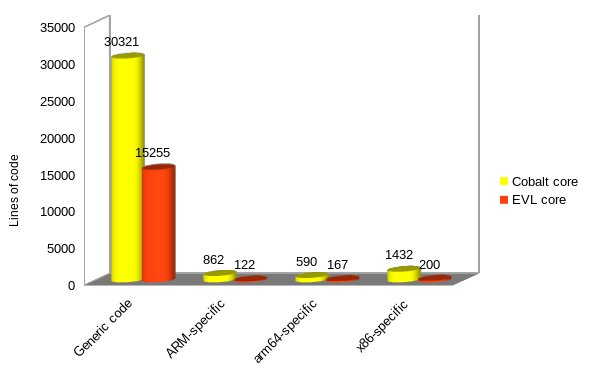 If you intend to port Dovetail to:

Then you could make good use of the following information:

Implementing your own companion core

If you plan to develop your own core to embed into the Linux kernel for running POSIX threads on the high-priority stage Dovetail introduces, you can use the EVL core implementation as a reference code with respect to interfacing your work with the general purpose kernel. To help you further in this task, you can refer to the following sections of this site:

Recipe for the impatient

For the rest of us

The process for getting the EVL core running on your target system can be summarized as follows (click on the steps to open the related documentation):

Once the EVL core runs on your target system, you can go directly to step #3 of the quick recipe above.