Interrupt pipelining involves a basic change in controlling the interrupt flow: handle_domain_irq() from the IRQ domain API redirects all parent IRQs to the pipeline entry by calling generic_pipeline_irq(), instead of generic_handle_irq().

Generic flow handlers acknowledge the incoming IRQ event in the hardware as usual, by calling the appropriate irqchip routine (e.g. irq_ack(), irq_eoi()) according to the interrupt type. However, the flow handlers do not immediately invoke the in-band interrupt handlers. Instead, they hand the event over to the pipeline core by calling handle_oob_irq().

If an out-of-band handler exists for the interrupt received, handle_oob_irq() invokes it immediately, after switching the execution context to the oob stage if not current yet. Otherwise, the event is marked as pending in the in-band stage’s log for the current CPU.

The execution flow throughout the kernel code in Dovetail’s pipelined interrupt model is illustrated by the following figure. Note the two-step process: first we try delivering the incoming IRQ to any out-of-band handler if present, then we may play any IRQ pending in the current per-CPU log, among which non-OOB events may reside. 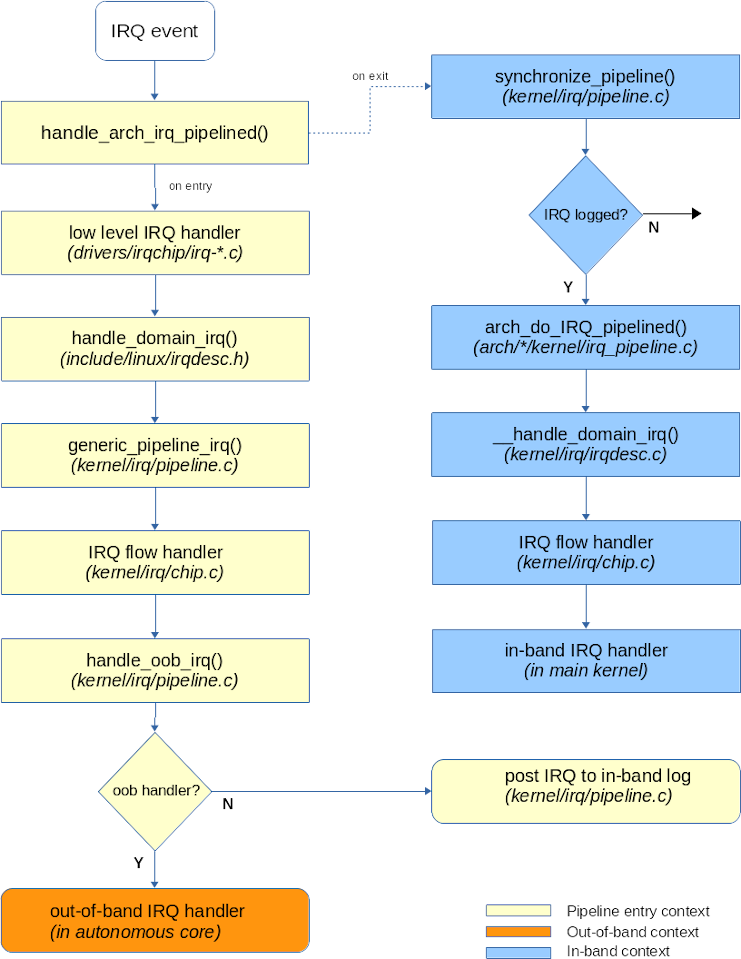 As illustrated above, interrupt flow handlers may run twice for a single IRQ in Dovetail’s pipelined interrupt model:

Once generic_pipeline_irq() has returned, if the preempted execution context was running over the in-band stage unstalled, the pipeline core synchronizes the interrupt state immediately, meaning that all IRQs found pending in the in-band stage’s log are immediately delivered to their respective in-band handlers. In all other situations, the IRQ frame is left immediately without running those handlers. The IRQs may remain pending until the in-band code resumes from preemption, then clears the virtual interrupt disable flag, which would cause the interrupt state to be synchronized, running the in-band handlers eventually.

For delivering pending interrupts to the in-band stage, the generic Dovetail core synchronizing the IRQ stage calls a routine named arch_do_IRQ_pipelined(), which you must provide as part of the pipeline’s arch-specific support code. This function is passed both device IRQs and IPIs, it should dispatch the event accordingly according to the following logic:

For ARM and ARM64, the corresponding code looks like this:

A couple of notes reading this code:

Since all of the IRQ handlers sharing an interrupt line are either in-band or out-of-band in a mutually exclusive way, such masking cannot delay out-of-band events.

The logic behind masking interrupt lines until events are processed at some point later - out of the original interrupt context - applies exactly the same way to the threaded interrupt model (i.e. IRQF_THREAD). In this case, interrupt lines may be masked until the IRQ thread is scheduled in, after the interrupt handler clears the event cause eventually.

The logic for adapting flow handlers dealing with interrupt pipelining is composed of the following steps:

This change reads as follows:

Fixing up the IRQ chip drivers

We must make sure the following handlers exported by irqchip drivers can operate over the out-of-band context safely:

For so-called device interrupts, no change is required, because the genirq layer ensures a single CPU at most handles a given IRQ event by holding the per-descriptor irq_desc::lock spinlock across calls to those irqchip handlers, and such lock is automatically turned into an hybrid spinlock when pipelining interrupts. In other words, those handlers are properly serialized, running with interrupts disabled in the CPU as their non-pipelined implementation expects it.

Unlike for device interrupts, per-CPU interrupt handling does not need to be serialized this way, since by definition, there cannot be multiple CPUs racing for access with such type of events.

However, there might other reasons to fix up some of those handlers:

Finally, IRQCHIP_PIPELINE_SAFE must be added to the struct irqchip::flags member of a pipeline-aware irqchip driver, in order to notify the kernel that such controller can operate in pipelined interrupt mode. Even if you did not introduce any other change to support pipelining, this one is required: it tells the kernel that you did review the code for that purpose.

irq_set_chip() will complain loudly with a kernel warning whenever the irqchip descriptor passed does not bear the IRQCHIP_PIPELINE_SAFE flag and CONFIG_IRQ_PIPELINE is enabled. Take this warning as a sure sign that your port of the IRQ pipeline to the target system is incomplete.

When pipelining is enabled, Dovetail ensures preempt_schedule_irq() reconciles the virtual interrupt state - which has not been touched by the assembly level code upon kernel entry - with basic assumptions made by the scheduler core, such as entering with interrupts virtually disabled (i.e. the in-band stage should be stalled).