EVL defines five scheduling policies for running out-of-band threads. These policies are hierarchized: every time the core needs to pick the next eligible thread to run on the current CPU, it queries each policy module for a runnable thread in the following order:

Before a thread can be assigned to any EVL class, its has to attach itself to the core by a call to evl_attach_self.

This call changes the scheduling attributes for the thread referred to by efd in the EVL core.

-EBADF efd is not a valid thread descriptor.

-EINVAL Some of the parameters in attrs are wrong. Check attrs->sched_policy, and the policy-specific information may EVL expect for more.

-ESTALE efd refers to a stale thread, see these notes.

evl_set_schedattr() immediately changes the scheduling attributes the EVL core uses for the target thread when it runs in out-of-band context. Later on, the next time such thread transitions from out-of-band to in-band context, the main kernel will apply an extrapolated version of those changes to its own scheduler as well.

The extrapolation of the out-of-band scheduling attributes passed to evl_set_schedattr() to the in-band ones applied by the mainline kernel works as follows:

This is the call for retrieving the current scheduling attributes of the thread referred to by efd.

The value returned in attrs.sched_priority is the base priority level of the thread within its scheduling class, which does NOT reflect any priority inheritance/ceiling boost that might be ongoing.

-EBADF efd is not a valid thread descriptor.

-ESTALE efd refers to a stale thread, see these notes.

The first-in, first-out policy, fixed priority, preemptive scheduling policy. If you really need a refresher about this one, you can still have a look at this inspirational piece of post-modern poetry for background info. Or you can just go for the short version: with SCHED_FIFO, the scheduler always picks the runnable thread with the highest priority which spent the longest time waiting for the CPU to be available.

Switching a thread to FIFO scheduling is achieved by calling evl_set_schedattr(). The evl_sched_attrs attribute structure should be filled in as follows:

The round-robin policy is based on SCHED_FIFO internally. Additionally, it limits the execution time of its members to a given timeslice, moving a thread which fully consumed its current timeslice to the tail of the scheduling queue for its priority level. This is designed as a simple way to prevent threads from over-consuming the CPU within their own priority level.

Unlike the main kernel which defines a global timeslice value for all members of the SCHED_RR class, EVL defines a per-thread quantum instead. Since EVL is tickless, this quantum may be any valid duration, and may differ among threads from the same priority group.

Switching a thread to round-robin scheduling is achieved by calling evl_set_schedattr(). The evl_sched_attrs attribute structure should be filled in as follows:

The quota-based policy enforces a limitation on the CPU consumption of threads over a fixed period of time, known as the global quota period. Threads undergoing this policy are pooled in groups, with each group being given a share of the period (expressed as a percentage). The rules of the SCHED_FIFO policy apply among all threads regardless of their group.

For instance, say that we have five distinct thread groups, each of which is given a runtime credit which represents a portion of the global period: 35%, 25%, 15%, 10% and finally 5% of a global period set to one second. The first group would be allotted 350 milliseconds over a second, the second group would get 250 milliseconds from the same period and so on.

Every time a thread undergoing the SCHED_QUOTA policy is given the CPU, the time it consumes is charged to the group it belongs to. Whenever the group as a whole reaches the alloted time credit, all its members stall until the next period starts, at which point the runtime credit of every group is replenished for the next round of execution, resuming all its members in the process.

You may attach as many threads as you need to a single group, and the number of threads may vary among groups. The alloted runtime quota for a group is decreased by the execution time of every thread in that group. Therefore, a group with no thread does not consume its quota. 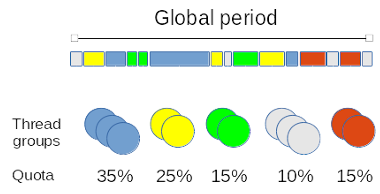 Switching a thread to quota-based scheduling is achieved by calling evl_set_schedattr(). The evl_sched_attrs attribute structure should be filled in as follows:

Each thread group is given its full quota every time the global period starts, according to the configuration set for this group. If the group did not consume its quota entirely by the end of the current period, the remaining credit is added to the group’s quota for the next period, up to a limit defined as the peak quota. If the accumulated credit would cause the quota to exceed the peak value, the extra time is spread over multiple subsequent periods until the credit is fully consumed.

EVL supports up to 1024 distinct thread groups for quota-based scheduling system-wide. Each thread group is assigned to a specific CPU by the application code which creates it, among the set of CPUs EVL runs out-of-band activity on (see the evl.oobcpus kernel parameter).

A thread group is represented by a unique integer returned by the core upon creation, aka the group identifier.

Creating a new thread group is achieved by calling evl_sched_contol(). Some information including the new group identifier is returned in the ancillary evl_sched_ctlinfo structure passed to the request. The evl_sched_ctlparams control structure should be filled in as follows:

On success, the following information is received from the core regarding the new group:

This policy enforces a so-called temporal partitioning, which is a way to schedule thread activities on a given CPU so that they cannot overlap time-wise. To this end, the policy defines a global, major time frame of fixed duration repeating cyclically, which is divided into smaller minor frames or time windows also of fixed durations, but not necessarily equal. Therefore, a minor frame is bounded by its time offset from the beginning of the major frame, and its own duration. The sum of all minor frame durations defines the duration of the global time frame.

Each minor frame contributes to the run-time allotted within the global time frame to a group of thread called a partition. The maximum number of partitions in the system is defined by CONFIG_EVL_TP_NR_PART in the kernel configuration. Each thread undergoing this policy is attached to one of such partitions.

You may assign as many threads as you need to a single partition, and the number of threads may vary among partitions. A partition with no thread simply runs no SCHED_TP thread until the next minor frame assigned a non-empty partition starts. 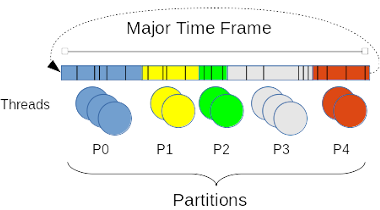 Switching a thread to temporal partitioning is achieved by calling evl_set_schedattr(). The evl_sched_attrs attribute structure should be filled in as follows:

ptid should be a valid partition identifier between 0 and CONFIG_EVL_TP_NR_PART - 1.

Within a minor time frame, threads undergo the SCHED_FIFO policy according to their fixed priority value.

Setting the temporal partitioning information for a CPU

Temporal partitioning is defined on a per-CPU basis, you have to configure each CPU involved in this policy independently, enumerating the minor frames which compose the major one as follows:

If the special value EVL_TP_IDLE is assigned to a minor time frame (ptid), no thread undergoing the SCHED_TP policy will run until such frame elapses. This is a way to create a time hole within the major time frame.

This operation implicitly overrides the previous TP settings for the CPU, leaving the TP scheduling in stopped state. Generally speaking, once a TP schedule is installed for a CPU, it is left in standby mode until explicitly started.

Starting the TP scheduling on a CPU

The following request enables the TP scheduler for the given CPU; you have to issue this request for activating a TP schedule:

Stopping the TP scheduling on a CPU

You can disable the scheduling of threads undergoing the SCHED_TP policy on a CPU by the following call:

Upon success, the target CPU won’t be considered for running SCHED_TP threads, until the converse request evl_tp_start is received for that CPU.

Retrieving the temporal partitioning information from a CPU

The following request fetches the current scheduling plan for a given CPU:

The minor frames active for the target CPU are readable from the result.windows[] array, up to param.nr_windows[] . The number of valid elements in this array is given by result.info.nr_windows[].

Removing the temporal partitioning information from a CPU

This is the converse operation to evl_tp_install, removing temporal partitioning support for the target CPU, releasing all related resources. This request implicitly stops the TP scheduling on such CPU prior to uninstalling.

You may want to run some POSIX threads in-band most of the time, except when they need to call some EVL services occasionally. Occasionally here means either non-repeatedly, or at any rate not from a high frequency loop.

Members of this class are picked second to last in the hierarchy of EVL scheduling classes, right before the sole member of the SCHED_IDLE class which stands for the in-band execution stage of the kernel. The priority such threads have in the in-band context are preserved by this policy when they (normally briefly) run on the out-of-band execution stage. For this reason, SCHED_WEAK threads have a fixed priority ranging from 0 to 99 included, which maps to in-band SCHED_OTHER (0), SCHED_FIFO and SCHED_RR (1-99) priority ranges.

A thread scheduled in the SCHED_WEAK class may invoke any EVL service, including blocking ones for waiting for out-of-band notifications (e.g. depleting a semaphore), which will certainly switch it to the out-of-band execution stage. Before returning from the EVL system call, the thread will be automatically switched back to the in-band execution stage by the core. This means that each and every EVL system call issued by a thread assigned to the SCHED_WEAK class is going to trigger two execution stage switches back and forth, which is definitely costly. So make sure not to use this feature in any high frequency loop.

In a specific case the EVL core will keep the thread running on the out-of-band execution stage though: whenever this thread has returned from a successful call to evl_lock_mutex(), holding an EVL mutex. This ensures that no in-band activity on the same CPU can preempt the lock owner, which would certainly lead to a priority inversion would that lock be contended later on by another EVL thread. The lock owner is eventually switched back to in-band mode by the core as a result of releasing the last EVL mutex it was holding.

There are only a few legitimate use cases for assigning an EVL thread to the SCHED_WEAK scheduling class:

In all other cases where an in-band thread might need to be driven by out-of-band events which may occur at a moderate or higher rate, using a message-based mechanism such as a cross-buffer is the best way to go.

Also note that some EVL services may be called by regular POSIX threads. Typically, a plain POSIX thread may post an EVL semaphore for signaling an out-of-band EVL thread pending on it. You can find the allowed calling contexts for each EVL service from libevl there.

Switching a thread to SCHED_WEAK is achieved by calling evl_set_schedattr(). The evl_sched_attrs attribute structure should be filled in as follows:

The idle class has a single task on each CPU: the low priority placeholder task.

SCHED_IDLE has the lowest priority among policies, its sole task is picked for scheduling only when other policies have no runnable task on the CPU. A task member of the SCHED_IDLE class cannot block, it is always runnable