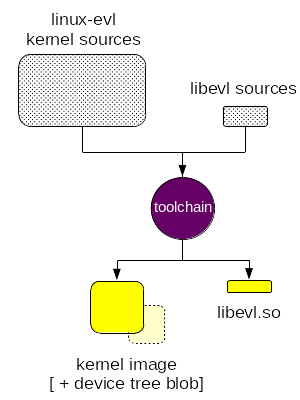 The build process. Building EVL from the source code is a two-step process: we need to build a kernel enabling the EVL core, and the library implementing the user API to this core - aka libevl - using the proper toolchain. These steps may happen in any order. The output of this process is:

* The static archive libevl.a is generated as well.

EVL sources are maintained in GIT repositories. As a preliminary step, you may want to have a look at the EVL development process, in order to determine which GIT branches you may be interested in these repositories:

In addition to the source code, we need:

libevl relies on thread-local storage support (TLS), which might be broken in some obsolete (ARM) toolchains. Make sure to use a current one.

Enabling CONFIG_EVL should be enough to get you started, the default values for other EVL settings are safe to use. You should make sure to have CONFIG_EVL_LATMUS and CONFIG_EVL_HECTIC enabled too; those are drivers required for running the latmus and hectic utilities available with libevl, which measure latency and validate the context switching sanity.

If you are unfamiliar with building kernels, this document may help. If you face hurdles building directly into the kernel source tree as illustrated in the document mentioned, you may want to check whether building out-of-tree might work, since this is how Dovetail/EVL developers usually rebuild kernels. If something goes wrong while building in-tree or out-of-tree, please send a note to the EVL mailing list with the relevant information.

Starting from EVL ABI 20 in the v5.6 series, the EVL core generally allows 32-bit applications to issue system calls to a 64-bit kernel when both the 32 and 64-bit CPU architectures are supported, such as ARM (aka Aarch32) code running over an arm64 (Aarch64) kernel. For arm64, you need to turn on CONFIG_COMPAT and CONFIG_COMPAT_VDSO in the kernel configuration. To be allowed to change the latter, the CROSS_COMPILE_COMPAT environment variable should be set to the prefix of the 32-bit ARMv7 toolchain which should be used to compile the vDSO (yes, this is quite convoluted). For instance:

For instance, if you plan to run EVL over any of the Raspberry PI 64-bit computers, you may find useful to use the PI-centric 32-bit Linux distributions readily available such as Raspbian. To do so, make sure to enable CONFIG_COMPAT and CONFIG_COMPAT_VDSO for your EVL-enabled kernel, building the 32-bit vDSO alongside as mentioned earlier.

The generic command for building libevl is:

Cross-compiling EVL and installing the resulting library and utilities to a staging directory located at /nfsroot/<machine>/usr/evl would amount to this:

Cross-compiling from a separate build directory

This is good practice to always generate the build output files to a separate build directory using the O= directive on the make command line, not to clutter your source tree with those. Generating output to a separate directory also creates convenience Makefiles on the fly in the output tree, which you can use to run subsequent builds without having to mention the whole series of variables and options on the make command line again.

Conversely, you may want to build EVL natively on the target system. Installing the resulting library and utilities directly to their final home located at e.g. /usr/evl can be done as follows:

Building natively from a build directory

At this point, you really want to test the EVL installation.