What is an EVL driver?

An EVL driver is a regular Linux driver, either of a character device driver or a socket protocol driver, which also implements a set of out-of-band I/O operations advertised by its file operation descriptor (struct file_operations). These out-of-band I/O requests are only available to EVL threads, since only such threads may run on the out-of-band execution stage. Applications running in user-space can start these I/O operations by issuing specific system calls to the EVL core.

Excerpt from include/linux/fs.h, as modified by Dovetail

In the particular case of the socket interface, Dovetail also connects the in-band networking core with the companion core through a simple internal interface so that the latter can provide out-of-band extensions.

Dovetail is in charge of routing the system calls received from applications to the proper recipient, either the EVL core or the in-band kernel. As mentioned earlier when describing the everything-is-a-file mantra, only I/O transfer and control requests have to run from the out-of-band context (i.e. EVL’s real-time mode), creating and dismantling the underlying file from the regular in-band context is just fine. Therefore, the execution flow upon I/O system calls looks like this: 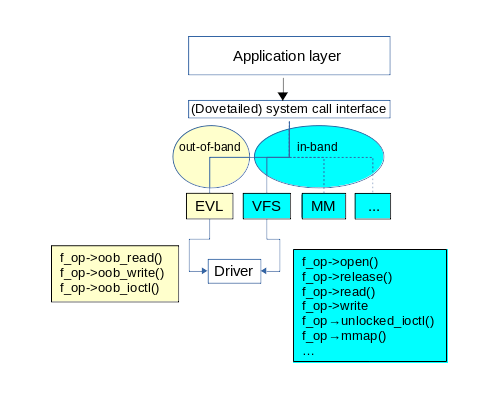 Which translates as follows:

Now, you may wonder: “what if an out-of-band operation is ongoing in the driver on a particular file, while I’m closing the last VFS-maintained reference to that file?” Well, with a properly written EVL driver, the close(2) call should block until the out-of-band operation finishes, at which point the .release() handler may proceed with dismantling the file. A simple rule for writing EVL drivers ensures this.