A most typical requirement in dual kernel systems is to exchange data between threads running in separate execution stages, i.e. out-of-band vs in-band, without incuring any delay for the out-of-band side. The EVL core implements a feature called a cross-buffer (aka xbuf), which connects the sending out-of-band end of a communication channel to its receiving in-band end, and conversely. As a result, data sent to a cross-buffer by calling oob_write() are received by calling read(2), data sent by calling write(2) are received by calling oob_read(). A cross-buffer can be used for transferring fixed-size or variable-size data, supports message-based and byte-oriented streams. For instance, such a mechanism would enable a GUI front-end to receive monitoring data from a real-time work loop. 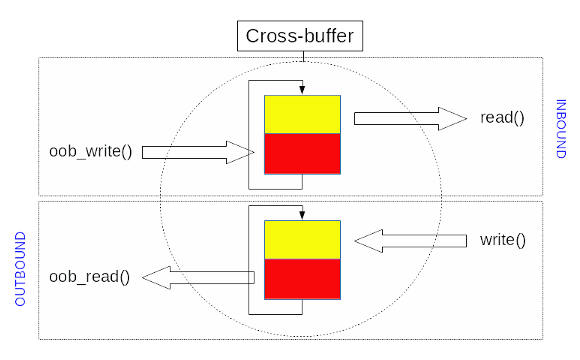 xbuf-specific semantics for sending and receiving

The following rules apply to cross-buffer transfers, in either directions (inbound and outbound): 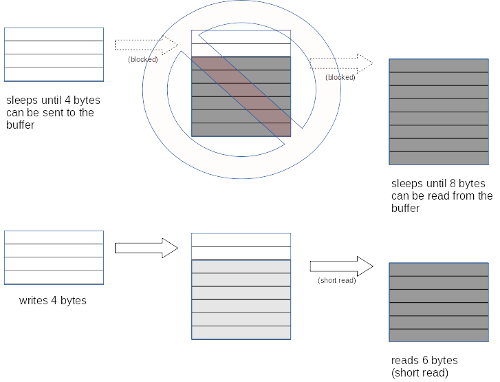 If you plan to send fixed-size messages through a cross-buffer and keeping the message boundaries intact matters, you should pick a buffer size which is a multiple of the basic message size, reading and writing complete messages at each transfer.

Otherwise, if O_NONBLOCK is set and not enough bytes are immediately available from the ring buffer for satisfying the request, the write operation fails with the EAGAIN error status.

This call creates a new cross-buffer, then returns a file descriptor representing the communication channel upon success. Internally, a cross-buffer is implemented as a pair of ring buffers conveying data from in-band to out-of-band context (i.e. inbound traffic), and conversely (i.e. outbound traffic). oob_write() and oob_read() should be used by callers running on the out-of-band stage for sending/receiving data through this channel respectively. Conversely, write(2) and read(2) should be used for accessing the channel from the in-band stage.

evl_create_xbuf() returns the file descriptor of the new cross-buffer on success. If the call fails, a negated error code is returned instead:

This call is a shorthand for creating a private cross-buffer with identically-sized I/O buffers. It is identical to calling:

The evl_poll() interface can monitor the following events occurring on a cross-buffer file descriptor:

Conversely, you can also use the in-band poll(2) on a cross-buffer file descriptor, monitoring the following events: