Measuring the response time to interrupts

Since the real-time infrastructure has to deliver reliable response times to external events - as in strictly bounded - whatever the system may be running when they happen, we have to measure the jitter between the ideal delivery date of such event, and the actual moment the application starts processing it. With Linux running on the hardware, reliable means that an upper bound to such jitter can be determined, although we are using a non-formal, probabilistic method through countless hours of testing under a significant stress load. Although the outcome of such test is not by itself representative of the overall capability of a system to support real-time applications, such test going wrong would clearly be a showstopper. No doubt that every real-time infrastructure out there wants to shine on that one. To measure the response time to interrupts in different contexts, EVL provides the latmus utility. The following figure illustrates the potential delays which may exist between the moment an interrupt request is raised by a device, and the time a responder thread running in the application space can act upon it:

(1) There may be multiple causes for the hardware-induced delay such as (but not limited to):

(2) Although handling the IRQ in some service routine from the real-time core is (hopefully) a short process which ends up readying the responder thread in the scheduler, it may be further delayed:

(3) Eventually, the scheduler is called in order to reconsider which thread should run on the CPU the responder thread was sleeping on when readied, which is subject to more potential delays:

Getting into these issues is not a matter of following a dual kernel vs native preemption approach: all of them bite the same way regardless.

A real-time system normally comes with a way to measure the latency of its threads on timer events. Xenomai provides one, the PREEMPT_RT project as well, so does EVL with the latmus program. No wonder why, running precisely timed work loops is a basic requirement for real-time applications. Besides, such a test requires only little preparation: we don’t need any external event source for running it, no specific equipment is needed, the on-chip high-precision clock timer of the system under test should be sufficient, therefore we can measure easily the latency directly from there.

EVL implements this test with the help of the latmus driver which sends a wake up event to an EVL-enabled responder thread created by the latmus application each time a new timer interrupt occurs. The responder thread gets a timestamp from EVL’s monotonic clock immediately when it resumes upon wake up, then sends that information to the driver, which in turn calculates the latency value, i.e. the delay between the ideal time the interrupt should have been received and the actual wake up time reported by the responder thread. This way, we account for all of the delays mentioned earlier which might affect the accuracy of a request for a timed wake up.

The driver accumulates these results, sending an intermediate summary every second to a logger thread with the minimum, maximum and average latency values observed over this period. The 1Hz display loop which is visible while the latmus application is running is synchronized on the receipt of such summary. The following figure illustrates this execution flow: 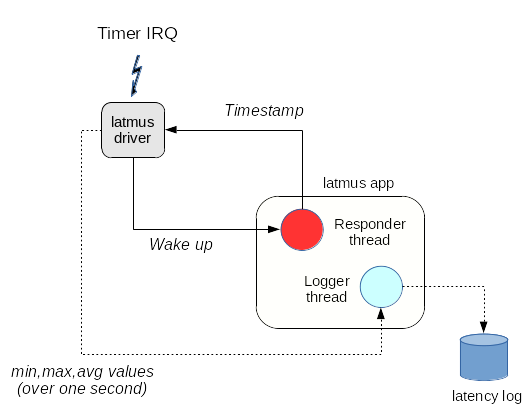 First, we need the latmus driver to be loaded into the kernel for the SUT. Therefore CONFIG_EVL_LATMUS should be enabled in the kernel configuration. From the command line, the entire test is controlled by the latmus application using the -m option, which can be omitted since measuring the response time to timer events is the default test.

The output format starts with a comment section which gives specifics about the test environment and the overall results (all lines from this section begin with a hash sign). The comment section is followed by the frequency distribution forming the histogram, in the form of a series of value pairs:

In addition to timer events, you will likely need to get a sense of the worst case response time to common device interrupts you may expect from EVL, as perceived by an application thread running in user-space. This test mode is also available from the latmus program, when paired with a Zephyr-based application which monitors the response time from a remote system to the GPIO events it sends.

From the perspective of the monitor system, we will measure the time it takes the SUT to not only receive the incoming event, but also to respond to it by sending a converse GPIO acknowledge. Therefore we expect the worst case figures to be higher than those reported by a plain response to timer test .

For implementing this test, we need:

The latmon application running on the monitor board periodically raises a GPIO pulse event on the TX wire, which causes the SUT to receive an interrupt. By calling into the EVL-enabled gpiolib driver, the responder thread created by the latmus application waits for such interrupt by monitoring edges on the GPIO pulse signal. Upon receipt, it immediately acknowledges the event by raising an edge on the GPIO ack signal, which latmon monitors for calculating the latency value as the delay between the acknowledge and pulse events. The latter accumulates these results, sending an intermediate summary every second over a TCP/IP stream to a logger thread running on the remote latmus application. This summary includes the minimum, maximum and average latency values observed over the last 1Hz period. Here again, the 1Hz display loop you can observe while latmus is running is synchronized on the receipt of such summary. The following figure illustrates this execution flow: 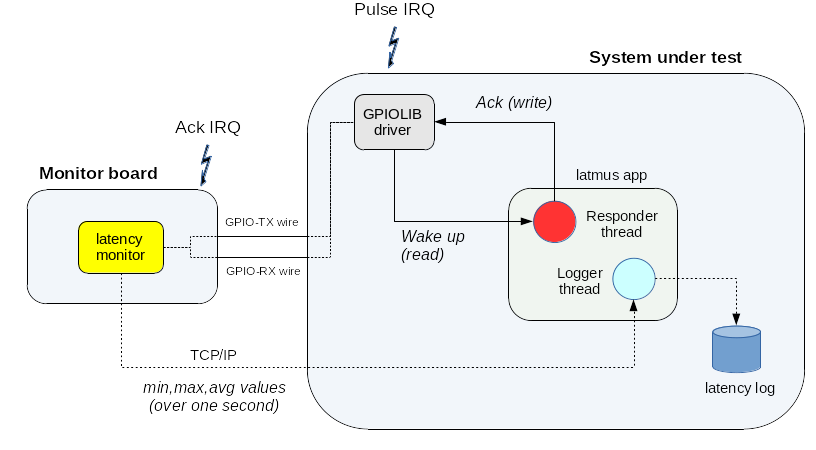 Quick recipe: monitoring the Raspberry PI 3 with the FRDM-K64F

From that point, the latency monitor running on the FRDM-K64F is ready to accept incoming connections from the latmus application running on the Raspberry PI 3 (SUT).

The GPIO response time of the standard or PREEMPT_RT kernel may be delayed by threading the GPIO interrupt, since this behavior is built in the generic GPIOLIB driver. The overhead involved in waiting for a context switch to be performed to the threaded handler definitely shows badly in the figures, especially under stress load.

Unfortunately, disabling IRQ threading entirely in a single kernel configuration (i.e. without EVL) would be the wrong option though, making the latency figures even worse. The following patch allows to disable IRQ threading on demand, only for GPIO chip drivers which cannot (more precisely: do not have to) sleep when accessing the chip registers. Once patched in, the kernel can be passed the gpiolib.nothread option at boot, which disables IRQ threading whenever possible for handling GPIO interrupts.

You definitely do not need this patch when running EVL, there is no such IRQ threading in the EVL-enabled GPIOLIB driver.

The following code is a hack, originally written on top of v5.4.5-rt3 only for the purpose of running comparable test cases between EVL and native preemption systems when it comes to measuring their response time to GPIO events. It is not intended to be a canonical solution to this problem.

Once the Zephyr board is started with the latmon application flashed in, we can run the benchmark tests on the system under test.

This is done by running the latmus application on the SUT, passing either of the -Z or -z option switch to select the execution stage, depending on whether we look for out-of-band response time figures (i.e. using EVL) or plain in-band response time figures (i.e. without relying on EVL’s real-time capabilities) respectively. In the latter case, we would not even need EVL to be present in the kernel of the SUT; typically we would use a PREEMPT_RT kernel instead.

When the test is started on the SUT, the latmon application should start monitoring the GPIO response times of the latmus application indefinitely until the latter stops, at which point the latency monitor goes back waiting for another connection.

Configuring the test kernel for benchmarking

Hints for configuring any test kernel

The issue of proper stress load

Finding the worst case latency in measuring the response time to interrupts requires applying a significant stress load to the system in parallel to running the test itself. There have been many discussions about what significant should mean in this context. Some have argued that real-time applications should have reasonable requirements, defined by a set of restriction on their behavior and environment, so that bounded response time can be guaranteed, which sounds like asking application developers to abide by the rules defined by kernel folks. When was the last time any of them did so anyway?

Obviously, we cannot ask the infrastructure to be resilient to any type of issue, including broken hardware or fatal kernel bugs. Likewise, it is ok to define and restrict which API should be used by applications to meet their real-time requirements. For instance, there would be no point in expecting low and bounded latency from all flavours of clone(2) calls, or whenever talking to some device involves a slow bus interface like i2c. Likewise, we may impose some restrictions on the kernel when it deals with these applications, like disabling ondemand loading and copy-on-write mechanisms with mlock(2).

Per Murphy’s laws, we do know that there is no point in wishful thinking, like hoping for issues to never happen provided that we always do reasonable things which would meet some hypothetical standard of the industry. Application developers do not always do reasonable things, they just do what they think is best doing, which almost invariably differs from what kernel folks want or initially envisioned. After all, the whole point of using Linux in this field is the ability to combine real-time processing with the extremely rich GPOS feature set such system provides, so there is no shortage of options and varieties. Therefore, when it comes to testing a real-time infrastructure, let’s tickle the dragon’s tail.

There are many ways to stress a system, often depending on which kind of issues we would like to trigger, and what follows does not pretend to exhaustiveness. This said, these few aspects have proved to be relevant over time when it comes to observing the worst case latency:

In addition to the latmus and latmon utilities described ealier in this document, the following software will be used in the test scenarios: