The EVL core provides a simple yet flexible support for implementing the observer design pattern in your application, based on the Observable element. The Observable receives a stream of so-called notices, which may be events, state changes or any data which fits within a 64bit word, delivering them as notifications (with additional meta-data) to subscribed threads called observers, when they ask for it. Subscribers do not have to be attached to the EVL core, any thread can observe an Observable element. Whether the threads which produce the events, the Observable and the observers live in the same or different processes is transparent.

By default, an Observable broadcasts a copy of every event it receives to every subscribed observer: 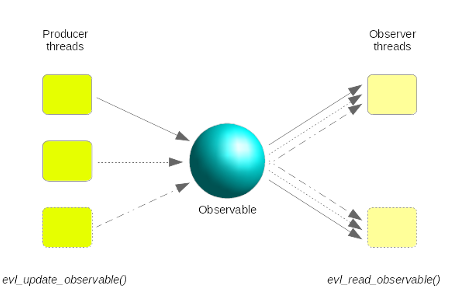 In some cases, you may want to use an Observable to dispatch work submitted as events to the set of observers which forms a pool of worker threads. Each message would be sent to a single worker, each worker would be picked on a round-robin basis so as to implement a naive load-balancing strategy. Setting the Observable in unicast mode (see EVL_CLONE_UNICAST) at creation time enables this behavior: 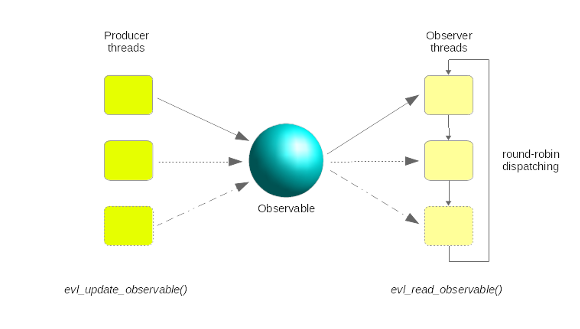 This call creates an Observable element, returning a file descriptor representing the new object upon success. This is the generic call form; for creating an Observable with common pre-defined settings, see evl_new_observable().

An Observable can operate either in broadcast or unicast mode:

evl_create_observable() returns the file descriptor of the newly created Observable on success. Otherwise, a negated error code is returned:

This call is a shorthand for creating a private observable operating in broadcast mode. It is identical to calling:

Working with an Observable

Once an Observable is created, using it entails the following steps, performed by either the thread(s) issuing the stream of events to the Observable, or those observing these events:

Observers need to subscribe to the Observable. Observers can subscribe and unsubscribe at will, come and go freely during the Observable’s lifetime. Depending on its subscription flags, the observer may ask for merging consecutive identical notices or receiving all of them unfiltered (See EVL_NOTIFY_ONCHANGE). 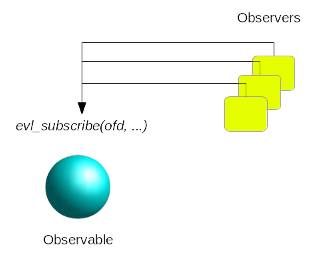 Event streamers can send notices to the Observable by calling evl_update_observable(). 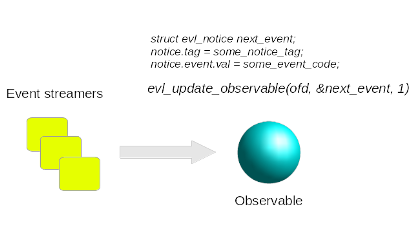 Observers can read notifications from the Observable by calling evl_read_observable(). 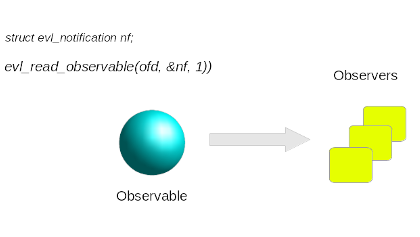 Once an Observable has become useless, you only need to close all the file descriptors referring to it in order to release it, like for any ordinary file.

This call sends up to nr notices starting at address ntc in memory to the Observable referred to by efd. This call never blocks the caller. It may be used by any thread, including non-EVL ones.

A notice contains a tag, and an opaque event value. It is defined by the following C types:

All notices sent to the Observable should carry a valid issuer tag in the evl_notice.tag field. For applications, a valid tag is an arbitrary value greater or equal to EVL_NOTICE_USER (lower tag values are reserved to the core for HM diag codes).

evl_update_observable() returns the number of notices which have been successfully queued. Each notice which have been successfully queued for consumption by at least one observer counts for one in the return value. Zero is returned whenever no observer was subscribed to the Observable at the time of the call, or no buffer space was available for queuing any notification for any observer. Otherwise, a negated error code is returned on error:

Sending a notice to an observable

This call receives up to nr notifications starting at address nf in memory from the Observable referred to by efd. It may only be used by observers subscribed to this particular Observable. If O_NONBLOCK is clear for efd, the caller might block until at least one notification arrives.

A notification contains the tag and the event value sent by the issuer of the corresponding notice, plus some meta-data. A notification is defined by the following C type:

The meta-data is defined as follows:

evl_read_observable() returns the number of notifications which have been successfully copied to nf. This count may be lower than nr. Otherwise, a negated error code is returned on error:

Receiving a notification from an observable

Events pollable from an Observable

The evl_poll() and poll(2) interfaces can monitor the following events occurring on an Observable:

In addition to these flags, POLLERR might be returned in case the caller did not subscribe to the Observable, or some file descriptor from the polled set refer to an EVL thread which was not created with the EVL_CLONE_OBSERVABLE flag.

An EVL thread is in and of itself an Observable element. Observability of a thread can be enabled by passing the EVL_CLONE_OBSERVABLE flag when attaching a thread to the EVL core. In this case, the file descriptor obtained from evl_attach_thread() may be subsequently used in Observable-related operations. If the thread was also made public (EVL_CLONE_PUBLIC), then there is a way for remote processes to monitor it via an access to its device.