A common issue with dual kernel systems stems from the requirement not to issue in-band system calls while running time-critical code in out-of-band context. Problem is that sometimes, you may need - for instance - to write to regular files such as for logging information to the console or elsewhere from an out-of-band work loop. Doing so by calling common stdio(3) routines directly is therefore not an option for latency reasons.

The EVL core solves this problem with the file proxy feature, which can push data to an arbitrary target file, and/or conversely read data pulled from such target file, providing an out-of-band I/O interface to the data producer and consumer threads. This works by offloading the I/O transfers to internal worker threads running in-band which relay the data to/from the target file. For this reason, I/O transfers may be delayed until the in-band stage resumes on a worker’s CPU. For instance, evl_printf() formats then emits the resulting string to fileno(stdout) via an internal proxy created by libevl.so at initialization.

Typically, out-of-band writers would send data through the proxy file descriptor using EVL’s oob_write() system call, which in-band readers could receive using the read(2) system call. Conversely, out-of-band readers would receive data through the proxy file descriptor using EVL’s oob_read() system call, which in-band writers could send using the write(2) system call. You can associate any type of file with a proxy, including a socket(2), eventfd(2), signalfd(2), pipe(2) and so on (see also the discussion below about the transfer granularity). This means that you could also use a proxy for signaling an in-band object from the out-of-band context, if doing so can be done using a regular write(2) system call, like eventfd(2) and signalfd(2).

The proxy also handles input and output operations from callers running on the in-band stage transparently.

Starting from kernel v5.10, a restricted set of file types supports proxying compared to earlier releases, specifically those for which the corresponding driver implements the read_iter(), write_iter() file operations. Regular files, sockets, pipes, tty and eventfd can still be used as proxy targets though.

Logging debug messages via a proxy

For instance, you may want your application to dump debug information to some arbitray file as it runs, including when running time-critical code out-of-band. Admittedly, this would add some overhead, but still low enough to keep the system happy, while giving you precious debug hints. Obviously, you cannot get away with calling the plain printf(3) service for this, since it would downgrade the calling EVL thread to in-band mode. However, you may create a proxy to the debug file:

Then channel debug output from anywhere in your code you see fit through the proxy this way:

There are a couple of ways which you could use in order to wake up an in-band thread waiting for some event to occur on the out-of-band side of your application, while preventing the waker from being demoted as a result of sending such a signal. One would involve running the in-band thread in the SCHED_WEAK scheduling class, waiting on some EVL synchronization object, such as a semaphore or event flag group. Another one would use a cross-buffer for sending some wakeup datagram from the out-of-band caller to the in-band waiter.

The file proxy can also help in implementing such construct, by connecting it to a regular eventfd(2), which can be signaled using the common write(2) system call:

Note the specific granularity value mentioned in the creation call above: we do want the proxy to write 64-bit values at each transfer, in order to cope with the requirements of the eventfd(2) interface. Once the proxy is created, set up for routing all write requests to the regular event file descriptor by 64-bit chunks, the in-band thread can wait for out-of-band events reading from the other side of the channel as follows:

EVL proxies can also be used for carrying over memory mapping requests to the final device which actually serves some mapping. The issuer of such request does not have to know which device driver will actually be handling that request: the proxy acts as an anchor point agreed between peer processes in order to locate a particular memory-mappable resource, and the proxy simply redirects the mapping requests it receives to the device driver handling the target file it is proxying for. 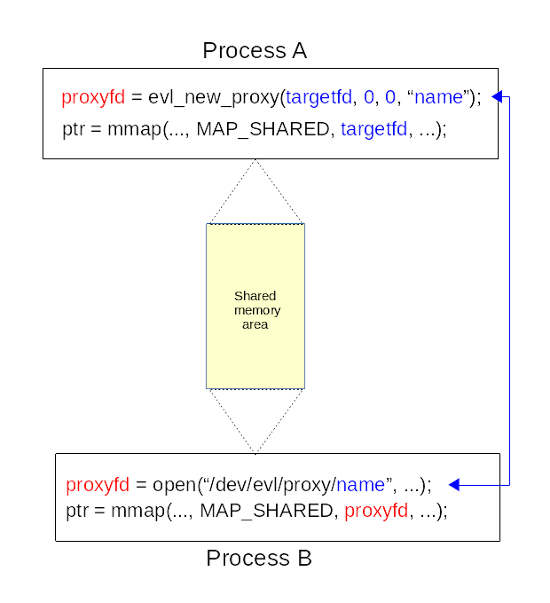 For instance, this usage of a public proxy comes in handy when you need to export a private memory mapping like those obtained by memfd_create(2) to a peer process, assuming you don’t want to deal with the hassle of the POSIX shm_open(3) interface for sharing memory objects. In this case, all this peer has to know is the name of the proxy which is associated with the memory-mappable device. It can open(2) that proxy device in /dev/evl/proxy, then issue the mmap(2) system call for receiving a mapping to the backing device’s memory. From the application standpoint, creating then sharing a 1 KB RAM segment with other peer processes may be as simple as this:

Any remote process peer could then do:

The other way you could do this is by passing the memfd file descriptor via a socket-based control message, but this would require significantly more logic in both peers than using a proxy.

evl_create_proxy() returns the file descriptor of the new proxy on success. If the call fails, a negated error code is returned instead:

This call is a shorthand for creating a private proxy with no particular transfer granularity. It is identical to calling:

If bufsz is non-zero, the output side of the proxy is implicitly enabled. If busfz is zero, then a mapping-only proxy is created.

This is a shorthand checking the current execution stage before sending the output through a proxy channel via the proper system call, i.e. write(2) if in-band, or oob_write() if out-of-band. You can use this routine to emit output from a portion of code which may be used from both stages.

evl_send_proxy() returns the number of bytes sent through the proxy. A negated error code is returned on failure, which corresponds to the errno value received from either write(2) or oob_write() depending on the calling stage.

A routine which formats a printf(3)-like input string before sending the resulting output through a proxy channel.

evl_print_proxy() returns the number of bytes sent through the proxy. A negated error code is returned on failure, which may correspond to either a formatting error, or to a sending error in which case the error codes returned by evl_send_proxy() apply.

This call is a variant of evl_print_proxy() which accepts format arguments specified as a pointer to a variadic parameter list.

evl_vprint_proxy() returns the number of bytes sent through the proxy. A negated error code is returned on failure, which may correspond to either a formatting error, or to a sending error in which case the error codes returned by evl_send_proxy() apply.

A shorthand which sends formatted output through an internal proxy targeting fileno(stdout). This particular proxy is built by the EVL library automatically when it initializes as a result of a direct or indirect call to evl_init().

The evl_poll() interface can monitor the following events occurring on a proxy file descriptor: