The tube is a lighweight and flexible FIFO data structure which you can use to send any type of data between threads. Since the algorithm manipulating a tube is lockless, threads can use it regardless of their respective execution stage, therefore a tube could also be used as a very simple inter-stage messaging system. In addition, the tube supports the multi-reader and multi-writer paradigms. The intent is to provide a basic mechanism which can either be used “as is” for fully non-blocking send/receive operations, or as a building block for implementing featureful message queues including sleeping wait for input and output congestion control.

At its core, an EVL tube is basically a one-way linked list conveying so-called canisters in a FIFO manner. Each canister is a container for a data item (or payload) a thread wants to send to another thread.

The following steps are required to create a tube:

Once the tube is initialized, threads can communicate over it by calling evl_send_tube() and evl_receive_tube().

You can use any valid C type to hold the payload into a canister. However, keep in mind that conveying a payload entails two copies of the corresponding data: first to install it into the canister when evl_send_tube() is called, next when evl_receive_tube() extracts it from the canister at the other end to private memory, so you definitely want to keep the payload size reasonable. If you need to convey large bulks of data as single messages flowing through the tube, then you should consider declaring a canister type which only stores a pointer to the final data, so that only that pointer needs to be copied, e.g.:

The macro call above defines the C struct type describing a canister which conveys a reference to a large bulk of data using an opaque pointer. It would be expanded as follows in the code:

A special form of tube can be used for transferring data between processes, using the *_rel() interface variant, which stands for relative addressing. As this implies, all internal references within the tube data structure use base-offset addressing instead of absolute memory pointers, so that such data structure can be mapped to a piece of memory shared between processes via mmap(2). DECLARE_EVL_TUBE_REL() should be used to define the C type of the new inter-process tube, along with DECLARE_EVL_CANISTER_REL() for declaring the canister type for such a tube. Eventually, evl_init_tube_rel() should be used for initializing the the new tube, evl_send_tube_rel() for pushing data through it, and evl_receive_tube_rel() for pulling available messages from it.

Of course, you still need to refrain from conveying absolute pointers referring to a particular process address space into the message payload. Here is an example of mapping an EVL tube which can handle up to 1024 messages flowing concurrently, to a new shared memory segment which we will be creating for the purpose:

Since sending and receiving to/from a tube is performed locklessly and does not involve any system call, this data structure can be used for implementing a basic message queue between threads which may belong to different stages, which is an alternative to using a cross-buffer.

A tube is inherently non-blocking, it neither imposes any policy nor provides support for sleeping in absence of input or for dealing with output congestion. It only provides a very simple lockless mechanism for transferring arbitrary data between peers. This means that evl_send_tube() may return a failure status (i.e. boolean false) if no free canister is available for conveying data at the time of the call. Conversely, evl_receive_tube() may also return a failure status in case no data is immediately available at the receiving end of the tube. If you need the sender(s) to handle output congestion by sleeping until canisters are free for sending to the other side, or the receiver(s) to sleep until some data is available for input, the trick is to combine a tube with the proper synchronization mechanisms. For instance:

The following figure summarizes these options for synchronizing tube operations: 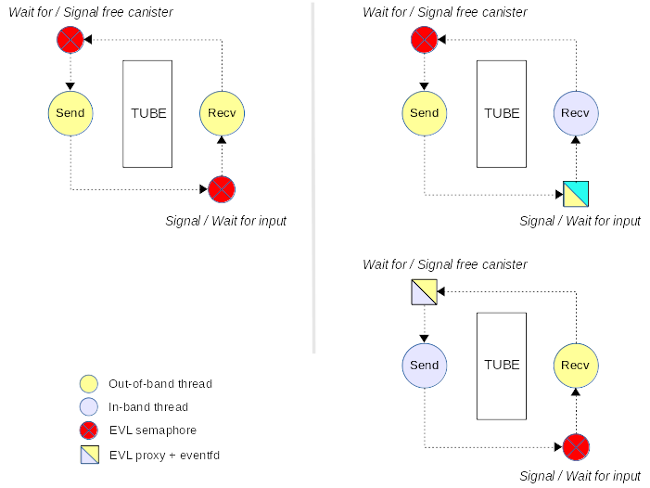 Initialize a tube data structure for process-local use, which can only happen once the canister and tube types have been defined.

Initialize a relative-addressing tube data structure for inter-process use, which can only happen once the canister and tube types have been defined. Unlike with the process-local variant, the relative-addressing variant requires both the tube meta-data and the canisters to be part of the same (shareable) memory segment so that all peers have easily access to both of them.

This macro returns the tube address which should be used in other relative-addressing calls. You can retrieve the number of canisters available with this tube by fetching the max_items members from the tube C type.

Send a data item through a tube in a FIFO manner. The _rel variant should be used for sending to a relative-addressing tube. This payload is first copied to a free canister, which is then queued for consumption by the receiving end.

This macro returns a boolean true value on success, or false in case no free canister was available for sending more data at the time of the call. If you need a mechanism to have the sender block on output contention, you may want to have a look at this section.

Receive the next available data item from a tube. The _rel variant should be used for receiving from a relative-addressing tube. The incoming payload is eventually copied to the payload argument before the conveying canister is made available anew for further sending.

This macro returns a boolean true value on success, or false in case no free canister was available for sending more data at the time of the call. If you need a mechanism to have the receiver block on lack of input, you may want to have a look at this section.

Return the size in bytes representing the amount of memory required for storing both the meta-data and the canisters for the given tube type.